Coal Mineral Deposits In Nigeria And Its Uses

Coal Deposits - Some African countries like Nigeria is blessed with coal-rich states especially Enugu which is known as the “the coal city” because of its vast coal deposits, other states include; Benue, Kogi, Delta, Kwara, Plateau, Abia, Anambra, Bauchi, Edo, Ondo, Adamawa, and Imo.

Fossil fuels came up as a result of the remains of dead animals and plants million years ago; an example of such fuels is coal. Coal is a fossil fuel and it’s a non-renewable energy source because it takes millions of years to form and cannot be renewed by men once depleted. 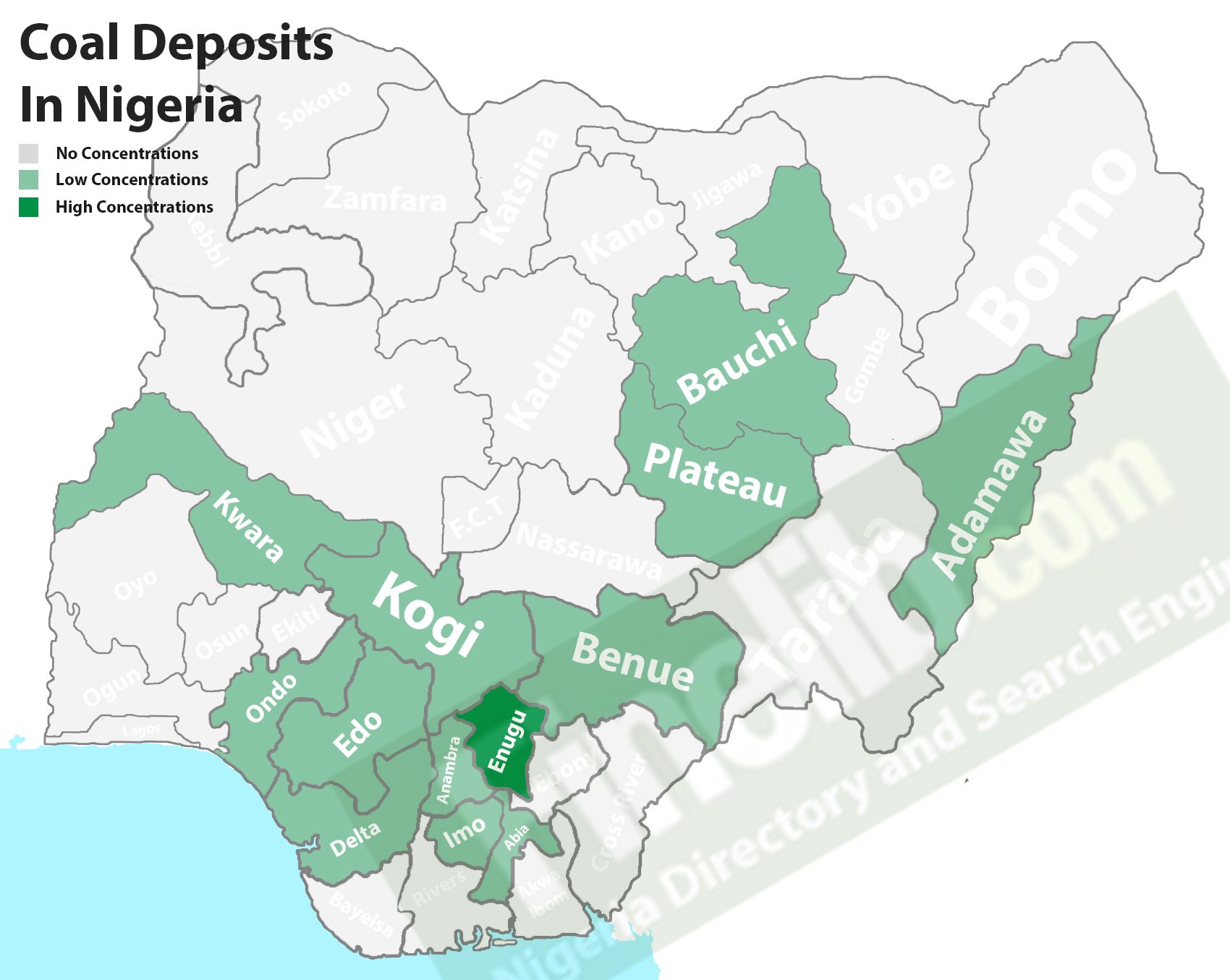 The Discovery of Coal, Mining, and Trading in Nigeria

The first coal was discovered in Nigeria far back in the year 1909 in the southeastern part of the country, at a specific location called Udi Ridge in Enugu state.

It was discovered by Albert Kitson, a British mines engineer who had been searching for silver mineral deposits.

During the year 1916, the Ogbete Mine, Enugu resumed coal mining operation fully, and then other mines such as Onyeama, Iva Valley, and Okpara climbing in the districts of Enugu followed suit.

The outcome of coal mining in Enugu in 1916 when Ogbete Mines first started operation was 25,511 metric tons, and it continued to spring up in the region.

At a point, Enugu mined 790,030 metric tons of coal before a steady decline set in 1967 - 1970 (during the Nigerian Civil War) as a result of the abandonment of several mines.

The exit of a number of expatriate professional miners from Britain and Poland, and the foundation of crude oil at Oloibiri in commercial quantities were the factors that led to the government abandoning the massive coal infrastructure at the mines, which were under the management of NCC.

It was this mining corporation that managed coal till 2002 when it finally folded up again after several years of unsuccessful administration.

However, the Federal government has a memorandum of understanding (MoU) of $3.7 billion, which they signed with a Chinese company, HTG-Pacific Energy Consortium, to carry on with power generation from coal deposits in Enugu.

That notwithstanding, history recorded that the approximate value of coal mined in Enugu recently is at 2.8 billion tons of coal.

The expatriate mining experts from Britain were the first people to mine coal professionally in Nigeria, particularly at the location where it was first discovered.

After which the Poland miners joined when several mining fields were discovered in different parts of the country.

Coal was founded and mined in the Southeastern regions of Nigeria and Middle belt states such as Kogi, Benue, and Gombe.

Trading of coal in Nigeria began in 1914, during the country's amalgamation year. It was in this year that the first coal was exported out of the country to the United Kingdom from Port Harcourt, the newly invented port then.

Method of Coal Mining in Nigeria, and West Africa

During the coal mining era, the method used in the Western part of Africa especially in Nigeria was underground mining.

This process is quite inexpensive when compared to other mining methods, but has its own disadvantages. Some of which include methane explosions, underground water flooding, etc.

And even years after the mining operation, it has resulted in landslides in most operational areas, and this poses a great risk impact in the health and safety of humans.

Coal mining stone roller crusher: This is the mobile crusher used in mining and crushing coal from the mining site.

Scraper conveyor machine: This is the coal mine transport scraper machine used for conveying extracted coal.

Coal-cutting machine: Machinery for producing a cut in a seam of a coal mineral in underground operations.

In the Nigerian market, the local price of coal commodities at the loading point could vary from NGN5, 000 - NGN7, 000/MT.

Coal Exporters and Suppliers in Nigeria

There are various coal exporters, dealers, and leading exporters in Nigeria today who facilitate the supply of coal to many places around the world.

In most cases, the exporters partner with reputable coal miners/sellers to supply coal to buyers across the globe.

Nigeria accounts for the largest coal mining country with several coalfields. Although some of them were closed down long ago due to the low production of coal, many are still operative.

Some of the functional and non-functional (those that no longer produce coal) coal mines in Nigeria are;

Ogbete Mine in Enugu State

Maiganga Mine in Gombe State

Onyeama Mine in Enugu State

Iva Mine in Enugu

Hayes Mine in Enugu

Owupka Mine in Benue State

Okpara Mine in Enugu State

The mining and production of coal were at their peak in the 1950s, but unfortunately, after the civil war, coal production in Nigeria declined drastically.

Obviously, with the diversion to crude oil, the mining of coal has been removed from the Nigerian natural resources limelight.

According to history, Nigerian coal fields that no longer produce coal are as follows:

About Coal and Its Physical Properties

Coal is combustible (catch fire and burn easily) and consists mainly of 65-95% carbon with a small percentage of hydrogen, sulphur, oxygen, and nitrogen.

Coal is a naturally occurring sedimentary rock from peat; peat is a brownish (turf) material that contains some decomposed vegetable matter forming a deposit.

The pressure of the rock on top which creates heat causes the complex hydrocarbon compounds in the peat to be broken down into different components.

The lighter component which is gaseous (like methane) is forced out from the deposit, with the heavier component becoming richer in carbon undergoing different stages which occur as follows; plant debris to peat, sub-bituminous coal, bituminous coal, anthracite coal, lignite, and graphite which is a pure carbon mineral.

The history of coal dates back thousands of years, and its industrial revolution importance goes to the 19th and 20th centuries. It was said that the Chinese people have used it for over 3,000 years past.

With that being said, coal was first discovered in 1679 along the Illinois River by French explorers.

While in 1748, the initial commercial mining of coal took place near Richmond in Virginia.

Coal as the earliest source of light and heat was further discovered on April 13, 1750, by Dr. Thomas Walker in Kentucky.

History has it that Thomas was recorded as the first person to discover and use coal.

What are the types of coal?

Majorly, there are four (4) types or classifications of coal. They are otherwise called the ranks or grade, which are the slow, natural process during which decomposed organisms transform into closely compacted, crispy, harder, and more carbon-rich matters.

Four types or ranks of coal are:

1. Anthracite or hard coal: This is the hardest type of coal; hard and brittle, having a compact variety with submetallic luster.

Of all coal types, anthracite is the highest, consisting of the least number of impure carbons, maximum energy density, and the highest percentage of fixed carbon.

2. Bituminous or black coal: It's a lump of shiny, smooth coal with volatile content that is relative to high content. Bituminous coal contains a tar-like substance called asphalt or bitumen, and it's the middle-rank coal between subbituminous and anthracite

The quality is poorer compared to anthracite but of higher quality than lignite coal.

The formation of bituminous coal can occur as a result of exerting a higher pressure on lignite.

3. Lignite or brown coal: A soft, brownish, and intermediate coal between peat and bituminous coal, which its formation occurs naturally from compressed peat.

It is the least grade or rank of coal, showing some traces of plant structure with comparatively low heat content.

4. Sub-bituminous coal: This is a lignite type of coal, dark brown or black in colour, thus, exhibits heat content higher than that of lignite.

According to coal classification, sub-bituminous is ranked between lignite and bituminous coal with its properties ranging between both of them.

There are two types of coal mining which includes:

a. Surface or opencast mining is used when the coal seam is near the surface, and it's the widely used method for coal mining.

b.   Underground mining: This method is used when the coal is deposited far beneath the earth surface and includes:

i.    Room-and-pillar mining and

How Fossil Fuels are Formed

Fossil fuels came up as a result of the remains of dead animals and plants million years ago. An example of such fuels is coal.

Coal is a fossil fuel, and it’s a non-renewable energy source because it takes millions of years to form, and cannot be renewed by men once depleted.

These dead plants are turned into coal, in other words, fossil fuels, by heat and pressure. Also, it is important to know that fossils consist of hydrocarbon-containing natural resources, which are not from either plants or animal sources.

Coal commodity costs $40.15 US dollars per ton, which is not actually a specific price. At times, it might cost $55 per ton, though the point of view remained clouded by a sharp decline in the demand.

Generally, the free board, FOB price for coal commodity could vary from USD100-USD250/MT depending on the carbon content of the coal.

Coal Importers and Countries Exporting It

Over the years, the value of coal export has been averagely on increase for all the top countries that sell it out.

According to estimate, the largest coal buying countries that have imported the highest value dollar worth of coal (86.1% of all coal imported in 2019 worldwide) are:

Australia and Indonesia are by far, the largest coal net exporters on the coal trade map.

In 2017, these two countries accounted for 54.3% of world coal exports ahead of Russia, the United States, Colombia, and South Africa, which have 34.5% together as the total coal export.

The list below shows coal exporters (exporting countries) from the highest to the least.

Is used as fuel for Electricity.

Is used in steel and cement industries as a fuel for the extraction of iron from iron ore and for cement production.

Nigeria gained her natural resources, including coal as a large incentive from colonial rule, with other large deposits of minerals hidden beneath her soils around the nation.

Today, coal is known and recorded as one of the strategic minerals deposited in many states in Nigeria in large quantities, which started trading far back as 1902 as an essential commodity. 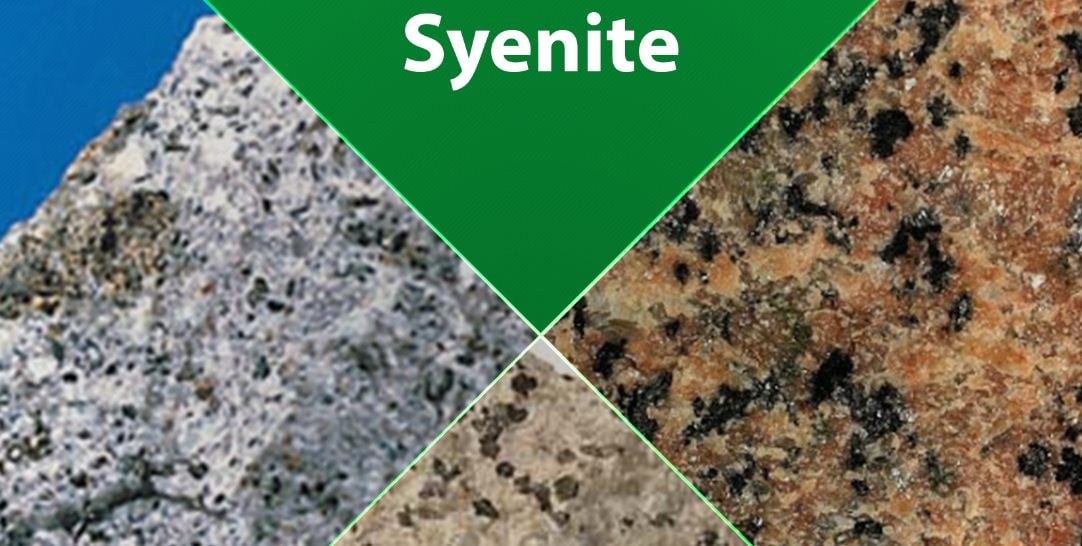 The word Syenite may not be common like Gold, Copper, and Lead in Nigeria, West Africa but it is one of the naturally found mineral resources that possess almost the same look like granite and can...

Information On Gemstones Types And Deposit States In Nigeria

Nigeria, West Africa is not an exception when it comes to gemstones, the country is richly blessed with one of the world’s most sought-after semi-precious and precious stones. Paraiba tourmalines are the most common type of...