Bentonite Mineral Depositions In Nigeria And It Benefits

Bentonite Clay Mining in Nigeria - Just like Nigeria, other Africa countries are also rich in this type of mineral resources.

Bentonite is popular in the Nigerian, West African market but is commonly-known with the local names such as NZU or NDOM in Efik. 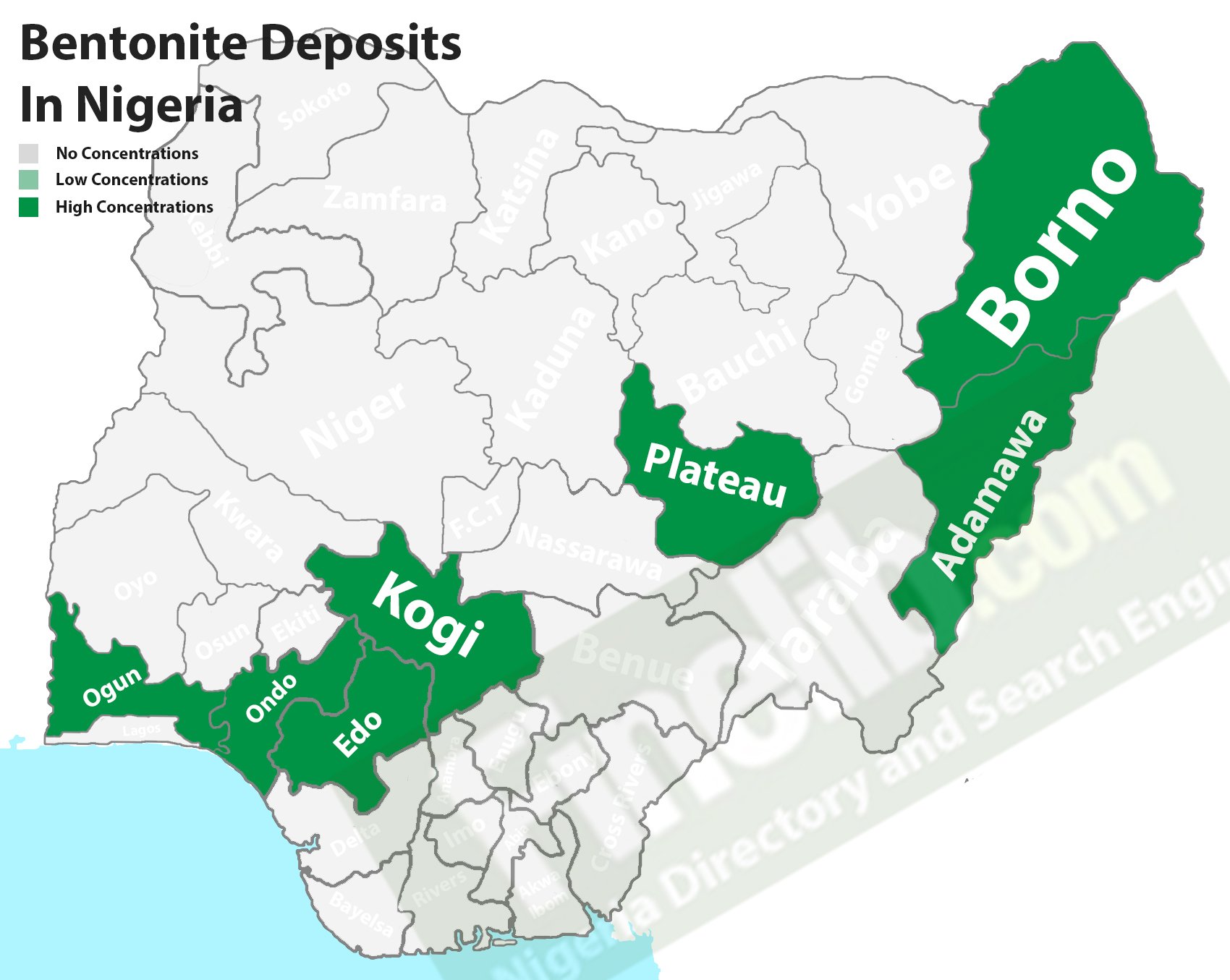 Mining of bentonite in Nigeria

The mining of bentonite in Nigeria started in 1961 at Bende Local government Area of the old Abia state in the eastern region of the country.

As at that period, the production of bentonite clay was 3000 tons per day. This production level rose significantly from 1961 to 1963 to the output of 5106 tons per day.

It is formed as a result of the decomposition of volcanic ash mainly in the presence of water. It has a boiling point of 2760oC and melting of 1300°C.

Companies venturing into bentonite mining in Nigeria need the necessary machinery mentioned below.

Scrapper: scrapper is a bentonite mining machine used in scrapping off the topsoil for bentonite to be mined.

Bentonite Crusher Machine: Its application is essential in the bentonite production process for crushing of the mineral.

Bentonite is of different types with varying elements such as potassium (K), sodium (Na), and calcium (Ca).

This is a sound absorbent. It absorbs water very well and expands when it is wet, and because of its colloidal properties, it is suitable for various applications.

This is the major constituents of fuller's earth, and because of its ability to decolorize oil and liquids without chemical treatment, it is regarded as a useful adsorbent of fats and oil as well as ions in solution.

This is rich in potassium. It has a crystal structure of muscovite and doesn't expand. It is formed from the modification of volcanic ash.

Of all three types, only 2 which is sodium and calcium bentonite are used for industrial purposes.

The compound summary of sodium bentonite is as follows;

The component compounds of bentonite

Calcium bentonite is a useful adsorbent of ions in solution, fats, and oils.

·     Sodium bentonite is mainly used in drilling mud for oil and gas wells, boreholes for geotechnical and environmental investigations due to its excellent colloidal properties.

·     Sodium bentonite is used as a sealant because of its low permeability barrier or groundwater barrier.

·     Sodium bentonite is used to line the base of landfills.

·   Bentonite can be used for external purposes like in skincare treatment, mud pack and also as a clay poultice.

·    Bentonite is used as a binder, purifier, and absorbent.

·    Bentonite is used in making toothpaste.

Is it good to use bentonite on the skin?

Because bentonite clay has an excellent adsorbent power, anybody with oily skin or any skin experiencing acne breakout can use it.

Additionally, if there is any inflammation on the skin, the clay can calm it down. It can also assist in removing oil or sebum from the skin.

With these few listed ideas, it is pronounced that bentonite is not particularly in any way harmful to the skin.

Bentonite got its name from a place named Fort Benton, Wyoming at upper cretaceous tuff in the year 1890 because it is a place that the deposit occurs in a large amount.

It got the name of its chief mineral 'montmorillonite' from Montmorillon, in Southern France, which was the first place the deposit was discovered.

How is bentonite formed?

Bentonite can be formed by the modification of volcanic glass to clay minerals.

Before this can be done, there must be a blend of water as well as the defeat of silica, alkalies and bases.

Therefore, this clay bentonite can be found at any place that has deep-rooted volcanic eruption. The clay is a result of the volcanic ash.

Which countries export of bentonite?

The countries topping the list of bentolite export as of 2018 were as follows;

Fluorite Natural Resources In Nigeria, Its Occurrence And Uses

Fluorite - Africa as a whole including Nigeria is richly blessed with abundant natural resources both vastly deposited ones and in traces and fluorite is one of them, fluorite is found in traces in Taraba State, the...

Tar sand belt in Nigeria lies in the onshore areas of the Eastern Dahomey (Benin) Basin, Western Africa which also extends right up to parts of Edo State, Mid-Western Nigeria. Other states with these deposits include...