Nigeria is one of the African countries that is richly blessed with abundant mineral resources and Tungsten is not an exception, these can be located in; Kano, Kaduna, Bauchi, Plateau, and Niger states.

The word Tungsten is believed to originate from the Swedish word “tungsten” which literally means heavy stone, it is also known as wolfram because it is one of the major deposits of Wolframite, and because of that, its chemical symbol is W and has the atomic number 74.

Tungsten is one of the rare metals in nature; it does occur in nature only in association with many (more than 20) minerals but occur in scheelite and wolframite in high deposits, wolframite is the chief ore of tungsten formed the basis for the chemical symbol W for tungsten as a chemical element. 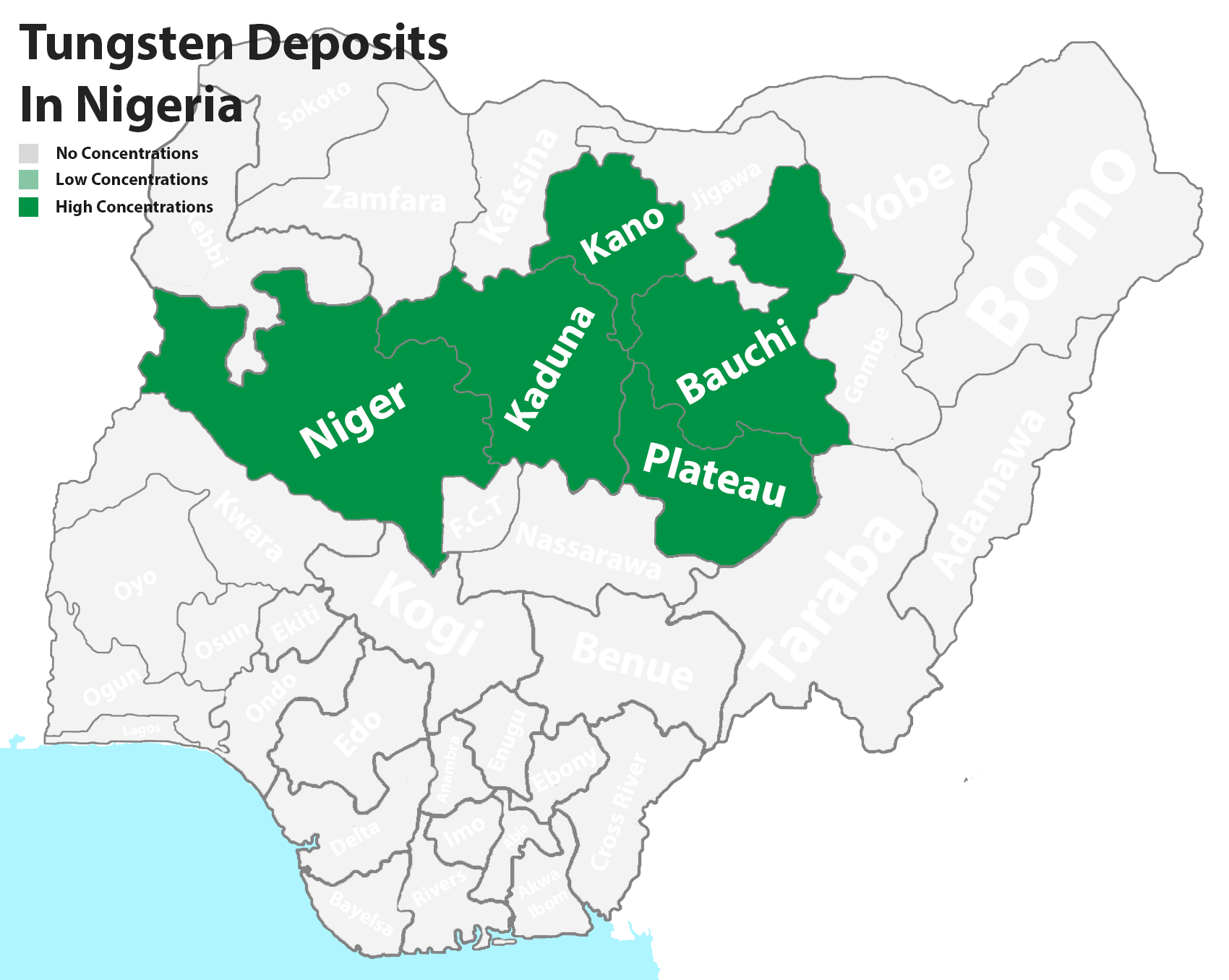 It has the lowest vapor pressure, highest melting point, and tensile strength when compared with metals in pure form, its melting point is 3422 °C, 6192 °F.

Pure tungsten has a white shiny appearance and can be easily bent. It is hardness and brittleness to a relatively greater extent due to the amounts of carbon and oxygen present, and it mainly exists in 2 crystalline forms, namely α and β.

Tungsten can be mined using conventional underground and open-cut mining methods. The concentrate of tungsten can be determined after crushing or grinding using;

a.  Ore sorting method which uses X-ray, optical, or UV in the case of scheelite.

b.  Gravity methods, though both scheelite and wolframite are heavy minerals, while wolframite is not susceptible to flotation, Scheelite is.

c.  Magnetic separation can also be used for wolframite but not possible for Scheelite separation.

Though there are different methods of Tungsten extraction and mining that are dependent on the mineral's physical and chemical properties such as its occurrence, depth, and more.

But basically, to extract Tungsten from Wolframite, these processes have to be followed;

Fluorite Natural Resources In Nigeria, Its Occurrence And Uses

Fluorite - Africa as a whole including Nigeria is richly blessed with abundant natural resources both vastly deposited ones and in traces and fluorite is one of them, fluorite is found in traces in Taraba State, the...

Copper is a chemical element that commonly exists in a lot of minerals. Copper ore or copper concentrate mineral has been one of the naturally occurring minerals that are available in Earth's crust of Nigeria, the...