Nigeria is the 3rd largest millet producing country in the world after India and China, and the leading producer in Africa followed Niger and Mali. The areas of production in Nigeria are; Kaduna, Yobe, Kano and Borno states.

It is an important food crops in Asia like India, and in Africa like Nigeria, Mali and Niger (the semiarid tropics), the production of this cash crop by the mentioned countries accounts for about 97% of millet production throughout the globe including China. 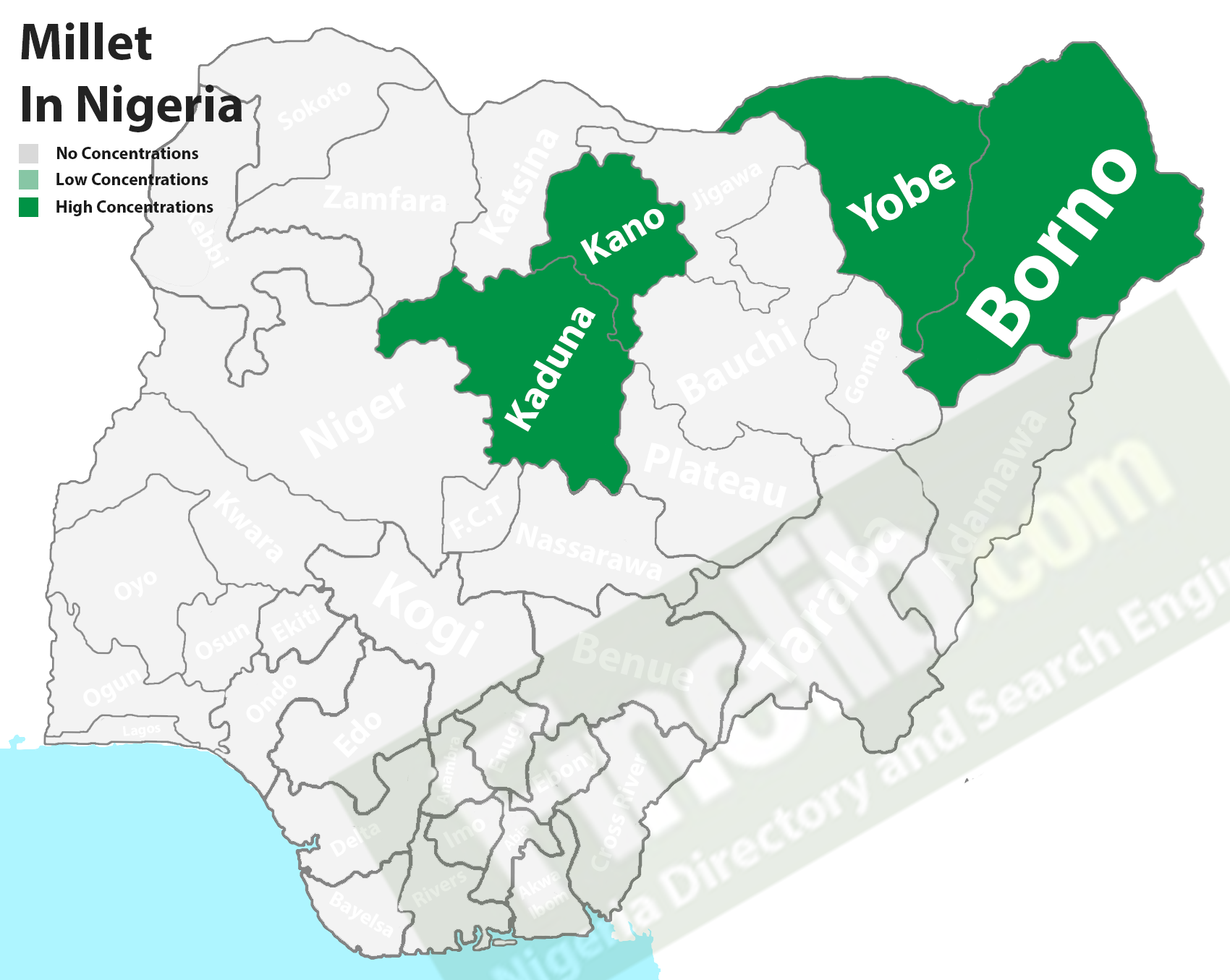 Millets has a botanical name of a Panicum, it is in the group of extremely small-seeded grasses, and is predominantly grown as  grain crops for human food and fodder livestock.

In terms of droughts and other extreme weather conditions, millet crops can survive, it has a short growing season and grows under high-temperature and dry conditions.

There are different varieties of millet such as;

Pearl Millet: known as Pennisetum glaucum; the most widely grown millet and an important crop in India and parts of Africa mostly in the northern part of Nigeria.

It is drought tolerant, and grows well in soil with low fertility, high salinity or low pH and high temperature.

It comes in a gold-coloured, yellow, and white colour.

Finger Millet: has a botanical name of Eleusine coracana, and has a brown-red colour, often times referred to as “red millet”.

Like pearl millet it is also predominantly grown in the arid areas of Africa and Asia and is an annual plant.

Proso Millet: is referred to as Panicum miliaceum, it adapts well in poor soil and climatic conditions, like others, it is an annual grass, has a short growing season but needs very little water.

It comes in cream, yellow, orange-red, or brown colours. This type of millet is not cultivated in Africa, it is primarily grown for livestock feed or as a bird seed in the United States, and is quite different from pearl millet, foxtail millet, finger millet, or the barnyard millets.

Foxtail Millet: has a botanical name of Setaria italica, and has recorded to have the longest history of cultivation among other millet, the seed colour varieties from grey to white etc., according to the species.

Generally, millet is nutritious and is rich in dietary fibre, iron, calcium, and B vitamins. It is widely used in baking bread as a millet flour, it can also be cooked or serve as an alternative for wheat, and in Nigeria like in most African countries, it is used to make porridge or millet juice, commonly known as kunu.

Groundnut Producing States In Nigeria And Its Commerical Uses

Groundnut is mainly grown in the northern part of Nigeria, West Africa in large quantities compared to other regions of the country. The below-listed states account for about 83-88% of the production, and they are; Kano,...

Sorghum Cultivation And Its Producing States In Nigeria