Magnesium can be found in Nigeria but in fewer locations unlike some African countries with vast deposits, it is one of the mineral resources that occur in nature in combination with other minerals. It is deposited in Adamawa and Kebbi states. 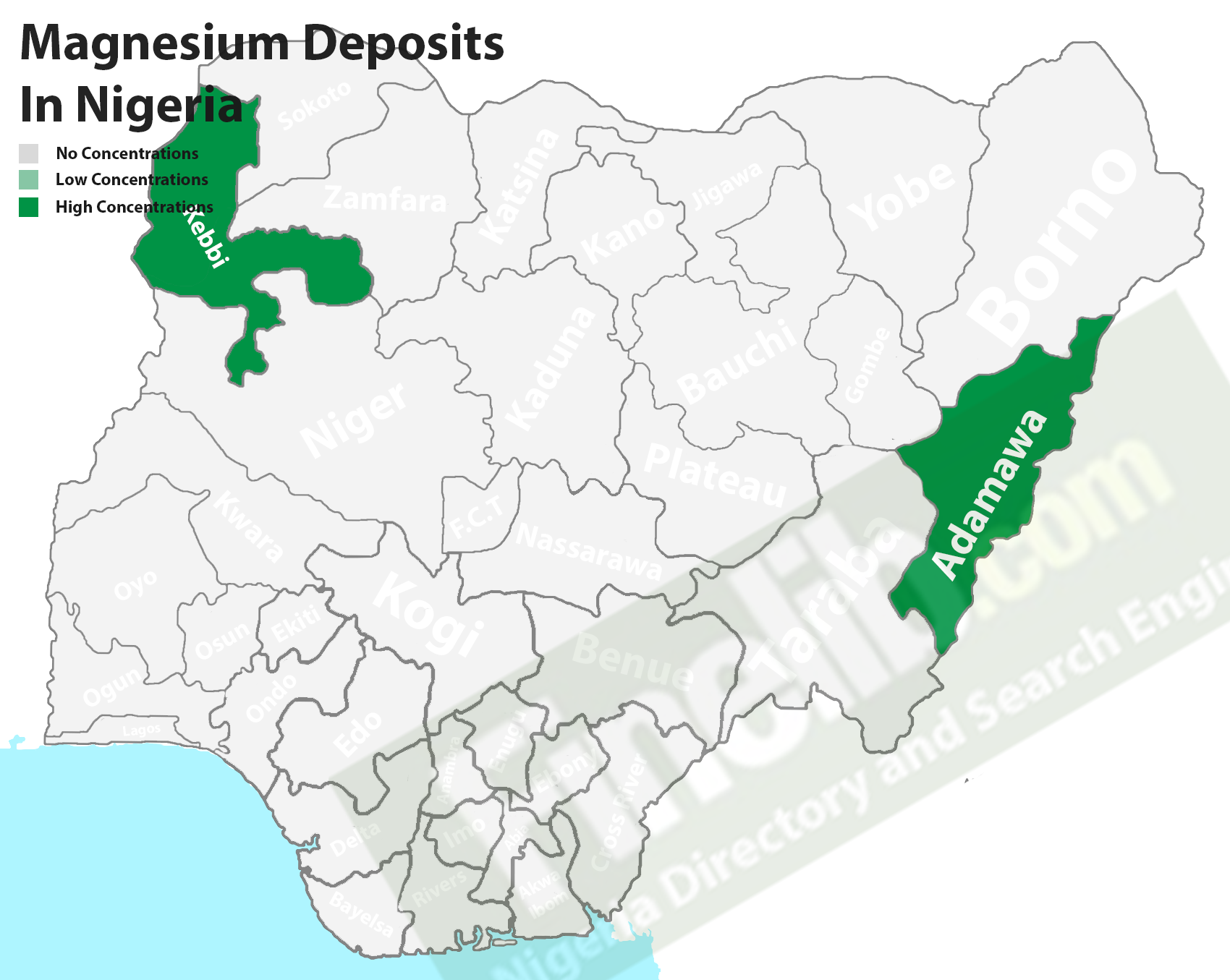 It only occurs in nature in combination with other minerals such as magnesite and dolomite.

The electrolytic process is mostly used in the United States to produced magnesium from magnesium chloride, and this occurs when seawater or magnesite is subjected to treatment together with calcium oxide, the reason for the calcium oxide is to help the resulted magnesium hydroxide to precipitate out. When the precipitate is collected, it is further treated with hydrochloric acid and heated to electrolyzed the compound converting it into magnesium chloride (magnesium and chlorine gas).

In using the silicothermic process, magnesite or calcined dolomite is heated to the point of vaporization after it has been mixed with ferrosilicon alloy, the vapor (magnesium vapour) is collected and then allowed for some time to cool, the rate of the cooling can be faster when it is put in a cooling vessel making the vapour to condense to magnesium, this process is mostly used in China.

II.    The third process is carried out by dissolving magnesite in hydrochloric acid to make magnesium chloride which is purified, dehydrated, and electrolyzed in an Alcan cell. The magnesium when in a molten state is removed and the chlorine gas (the leftover) is recycled and combined with hydrogen to make more hydrochloric acid. The process is mainly used in Australia.

Kaolin Minerals - Among the mineral resources in Nigeria, West Africa that can be found in commercial quantity, Kaolin is one of them, it is found in the following listed Nigerian states; Adamawa, Borno, Abia, Delta, Ekiti,...

Silver (Ag) Mineral Deposits In Nigeria And Its Applications

Silver Ore Mineral Deposits - Nigeria is one of the few African countries that has silver deposits, though silver is not vastly deposited in Nigeria like other minerals and metals, as it is only deposited in...

Nigeria is one of the West African countries with Zinc deposits, and the mineral-rich states in no particular order include Anambra, Ebonyi, Plateau, Cross Rivers, Zamfara, Abuja (FCT), Enugu, Imo, Kano, Niger, and Taraba. Zinc is the 4th most widely...