Kaolin Minerals - Among the mineral resources in Nigeria, West Africa that can be found in commercial quantity, Kaolin is one of them, it is found in the following listed Nigerian states; Adamawa, Borno, Abia, Delta, Ekiti, Kaduna, Katsina, Kogi, Ogun, Ondo, Oyo, and Plateau State, there has been a rough calculation on the kaolin mineral deposit reserve in the country which amounts to about 2 billion metric tonnes. 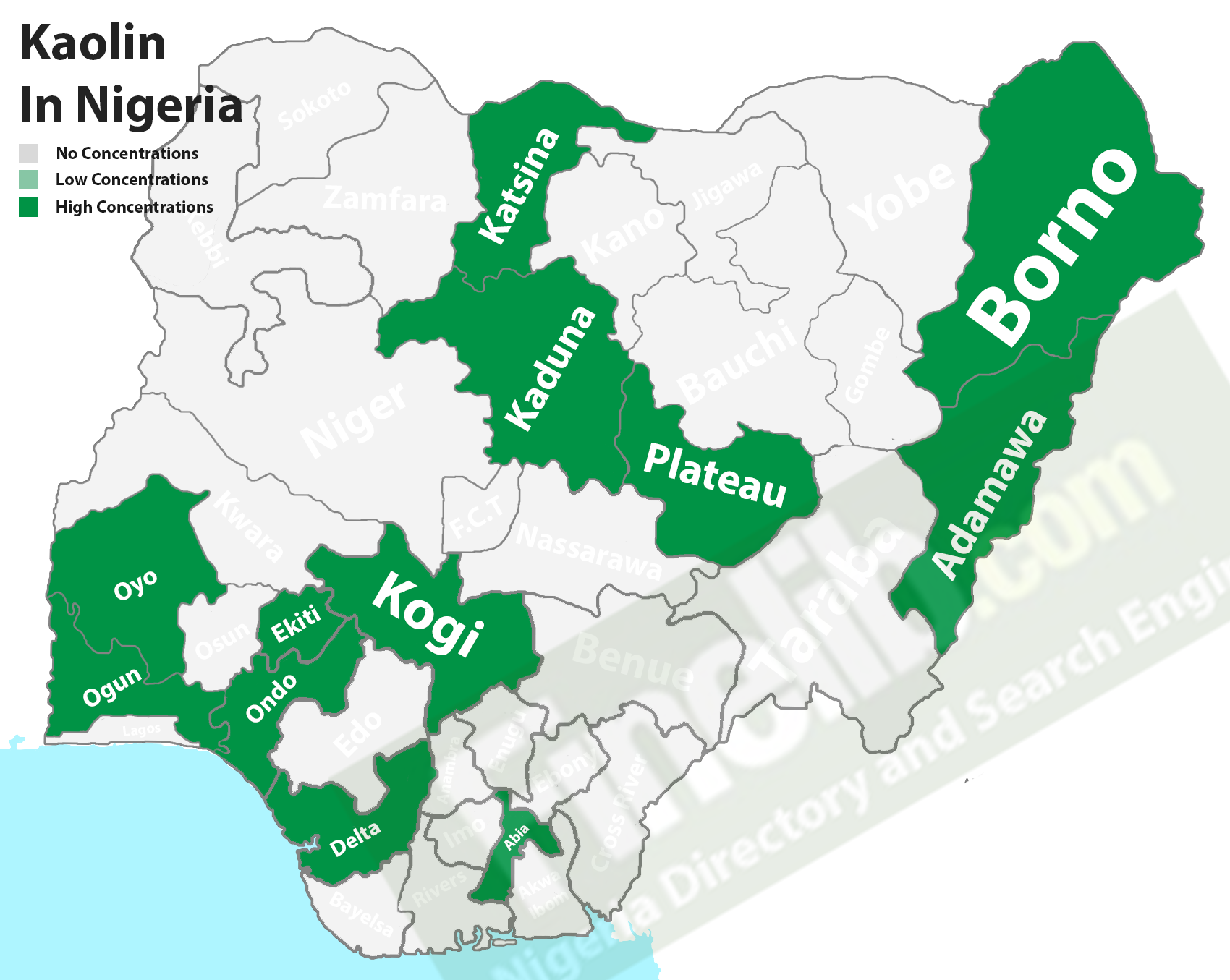 Kaolin or China clay has a texture of a soft powder and whitish in color.

It is a rock that is rich in kaolinite which implies that kaolinite is the principal mineral consistent with Kaolin.

It has a melting point of 1750 °C and is a clay mineral, part of the group of industrial minerals, with the chemical composition Al2Si2O5(OH)4or H2Al2Si2O8H2O orAl2H4O9Si2

The occurrence of Kaolinite clay is of a very large quantity in soils formed from the chemical weathering of rocks in tropical rainforest areas which has a hot and moist climate.

Naturally, kaolin is found in other minerals in various quantities such as muscovite, quartz, feldspar, and anatase.

Before kaolin is used for commercial use, it is in form of what is called crude kaolin due to the presence of iron hydroxide pigments which gives it a yellow stain-like color.

The color is removed through bleaching and washed to remove the other unwanted minerals.

To process Kaolin, there are two different types of processes involved, which are (1) wet process and (2) dry process.

The wet process is basically used when impurities of the silica content in the crude or raw kaolin are on the high side.

It results in the production of high-grade kaolin mainly used in pharmaceutical industries.

The dry process follows the sequence of drying, crushing, sifting (sieving) and bagging of raw kaolin.

This method is mostly used in the processing of raw kaolin with less silica and impurity content.

Though there are different types of kaolin and many ways in which it can be processed for treatment, it is important to know that what determines the type of process to be used is the mineralogical spectrum of the crude kaolin and the required end products.

Kaolin has a lot of industrial and commercial uses in Africa and globally and in order to promote the growth of kaolin local industries especially in Nigeria, the importation of these mineral resources was banned.

Vertical Roller Mill: For further processing of kaolin in order to grind into extremely fine particles.

Red clay just like the name implies is kaolin clay with a red color. The clay got its color from the iron oxide which is in large quantity in the area the clay is deposited.

The presence of iron oxide makes the clay soften the skin quite easily. Therefore, the red clay is good for aging skin to help keep it firm.

The green clay apart from the iron oxide present in the place it is deposited has a large amount of ancient plant matter deposited in that area.

The plant matter gives it a green color. Also, green clay is known to absorb greatly and so, it is good for oily skin or for curing acne.

Rose clay can also be called pink clay. This kind of kaolin clay gets its rose or pink colors from zinc, copper, magnesium, selenium, and manganese.

The Ph level of rose clay is close to that of the skin and this makes it perfect for all sorts of skin.

The origin of kaolin dates back to the 7th and 8th century where people from China first used clay to produce porcelain.

Because of the fact that it was first used in China, it was also given a second name ‘China clay’.

‘Kaolin’ is coined from the Chinese word ‘Kao-Ling’ which means ‘high ridge’ in China.

The name came about in reference to the high ridge hill from the first kaolin deposit was discovered.

At around 1700, a French Jesuit missionary sent the first samples of kaolin to be tested in Europe.

The fact that the clay was first discovered in China does not mean it is large quantity in China.

The United States of America has the highest deposit of kaolin clay and the best.

What are the countries producing kaolin?

Kaolin deposits can be found in many countries in the world. The lists of the countries producing kaolin are as follows;