Dolomite - Natural Resources In Nigerian States And Its Deposits

Dolomite Deposits - Nigeria is one of the African Countries with Dolomite deposits and these are located in Abuja, Edo (Ikpeshi and Akoko), Kogi, Nasarawa, Kwara, Yobe, and Oyo.

Dolomite is one of the compositions of limestone that can also be referred to as sedimentary rock, both Limestone, and Dolomite behave in similar ways when subjected to heat and pressure. 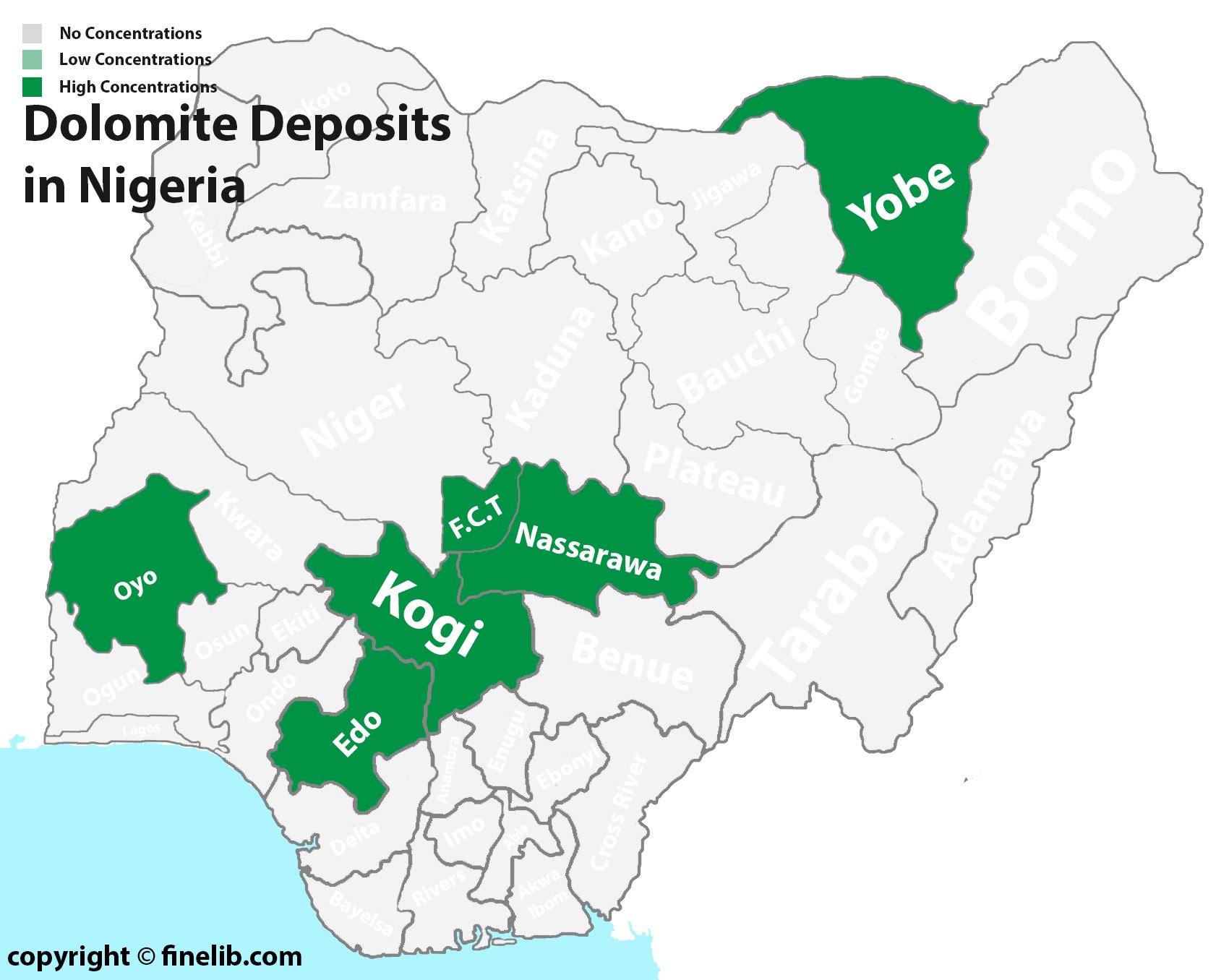 It is not found in many states in Nigeria but naturally occurs in limestone. Its quarrying is the same as limestone and most of the companies in Nigeria that are into limestone processing are likely also to be into the quarrying of dolomite.

Occurrence of dolomite in Nigeria

Dolomite is a solid mineral that occurs in several areas in Nigeria, mainly the Southwest and Middle belt regions of the country.

Its occurrences arise from the hydrothermal metasomatism or diagnosis of limestone in such places.

Also, the occurrences of dolomites deposits have been discovered in different areas in Nigeria, among them are Alagutan dolomite in Oyo state, Oreke dolomite in Ifelodun Local government area, Kwara State, Nigeria, etc.

Most Nigerians and West Africans may not be conversant with what dolomite actually is, and the word may really sound new to some persons when being compared to some of the minerals commonly found in the country.

Some of the companies in Nigeria that are into limestone/dolomite quarrying trading include, but are not limited to, Glister Success Limited, Stonehill Nigeria Limited, and others.

It has many commercial and industrial uses, and because of this, there are many businessmen in Nigeria and numerous African countries that have invested in the mineral-dolomite, there are also a number of exporters and suppliers of this natural mineral resources across Nigeria too.

Dolomite production and mining in Nigeria

The production of dolomite in Nigeria as a natural resource dated back to the year 1960. That was actually the period of time when dolomite was discovered in Lokoja, Kogi state for the first time.

Subsequently, the development of Igbeti marble deposits followed suit, before the others were founded as follows: Oreke dolomite of Kawara state, Alagutan dolomite field in Ori Ire, Oyo state, and then the Ikpeshi dolomite despite Edo state, Nigeria.

Among over 120 different mineral resources beneath Nigeria's surface, dolomite has counted among the profitable mineral that has been in the trade for the year.

The trading of dolomite minerals started around the 1970s after its discovery in Nigeria. Up to date, dolomite is still one of the most minerals globally demanded in vast volumes in Nigeria.

Today, Nigeria export dolomite to international suppliers, dealers as well as local buyers across the globe. Traders come from different parts of the world to buy from Nigeria due to its abundance, quality, and negotiable price.

Dolomite is one of the compositions of limestone that can also be referred to as a sedimentary rock. Both limestone and dolomite behave in similar ways when subjected to heat and pressure.

It is a carbonated mineral that is gotten from dolomite rock and is anhydrous in nature comprising mainly of calcium magnesium carbonate.

The composition is therefore, calcium + magnesium + carbonate = dolomite. However, it is chemically classified under carbonate, with the chemical symbol, CaMg (CO3)2.

Price of dolomite in Nigeria

The origin of dolomite

The foundation of dolomite begun at a particular time in the past, and that was 1792 by Nicolas de Saussure, by a Swiss naturalist who first described it as a mineral.

According to history, dolomites remain the only region of the mountain and peculiar type of limestone which was named after a mineral.

The ancient miner, due to similar characteristics features of dolostone to that of real limestone, called it 'bitterspat' and 'murkalzit'.

Thereafter, Carl Linnaeus, a botanist, and physician after observing the weak reaction of dolostone crystal with acid, named it "marmor tardum", without any basic knowledge that composition resulted from a new mineral that was unknown.

Between 1750–1801, Deodat Sylvain Guy de Tancrède Greatet de Dolomieu, a French naturalist and geologist got some samples of dolomite while he was traveling to Italy.

He actually collected the samples near the Brenner-Pass, and beside the Etsch river valley in the Alps. He then described it as a rock in 1791, in Italy.

In Dolomieu's publications of 1791, he noted an observation that stated that dolostone displayed almost no reaction with any acids from certain experiments that were carried out.

Nicolas de Saussure, who first described dolomite got aroused by the description given by Dolomieu, and therefore collected some samples for analysis.

He analyzed the samples and found out that magnesium and calcium were contained in high concentrations. He then came to the conclusion that the mineral wasn't just calcite as naturalists who previously examined it thought.

With respect to the chemical analysis and observations made by Saussure and Dolomieu, Richard Kirwan, an Irish chemist called the stone, dolomite, in honor of Dolomieu.

It can be colorless, white, pink, green, gray, brown, or black in colour.

The most common type of dolomite rock that is widely known is the former limestone before its dolomitization.

Dolomitization of limestone means that its main constituent, calcite or aragonite calcium carbonate was substituted with mineral dolomite, magnesium ions.

It's a geological process through the action of magnesium-bearing water percolating the limestone as mineral alteration into dolomite, which happens due to water evaporation.

What is the difference between Limestone and Dolomite?

Limestone is a carbonate sedimentary rock composed of calcium minerals and the skeletal fragmentation of marine organisms while dolomite is an anhydrous carbonate mineral made of calcium magnesium carbonate.

Again, limestone contains clay, sand, and silt as common impurities, which are not quite common in dolomite.

Thirdly, calcite limestone, in most cases is usually more costly than dolomite.

The largest producer of dolomite rock-mineral in Odisha in India.

Which metal ore is dolomite?

Dolomite can be described as a rock, as well as an industrial mineral, not an ore for any metal.

Typically, it's a sedimentary carbonate type of rock, consisting of calcium and magnesium carbonate.

The mining of dolomite is the process that is involved in separating the concentrates of this mineral from raw ores.

Dolomitic limestone is mined together with limestone and dolomite, which are crushed thereafter and used as stones aggregates for manufacturing concrete and pavement used in construction.

Dolomite crusher: this machine is used in crushing dolomite ore into dolomite sand or smaller particles.

Dolomite processing plant: this plant is used for crushing, screening, milling, and powder selection of dolomite.

Dolomite commodity is recording the 1011th mineral product that is most traded around the world today.

Again, according to the PCI, Product Complexity Index, it ranks the 795th most complex product.

The top exporters of dolomite mineral according to ascending order are:

Dolomite, which is found in most sedimentary basins across the world, is formed by the alteration of post-depositional limestone and lime mud and is caused by magnesium-rich groundwater.

It begins to recrystallize as the temperature rises thus increasing the size of the dolomite crystals in the rock developing it into a distinctly crystalline appearance. It is cut into slabs when mining.

The formation involves three different phases, which begin initially with the replacement of the calcite ions by the magnesium ions, and then dolomitization.

This rock-forming mineral often occurs as rhombohedral crystals and a common mineral. It forms within the distinct sheet-like body of crystallized minerals within a rock.

There are various methods of detecting areas rich in dolomite deposits such as by using electrical resistivity.

Another quick and simplified method that can be used to identify dolomite deposits is the Fourier transformation Infrared Spectrophotometry (FTIR).

Used in the production of magnesium using Pidgeon process.

Dolomite and dolomitic limestone are used in horticulture, as they are added to soils to help buffer the pH of the water and also as a magnesium source.

Dolomite is used in the steel industry as a sintering agent especially in the processing of iron ore.

In the production of steel, dolomite is used as a flux.

Is used in the chemical industry to produce magnesia (MgO).

Dolomite is used as an ornamental stone.

It serves as a soil conditioner and a feed additive for livestock.

Dolomite is used in the production of glass and ceramics.

Dolomite, as a natural resource is deposited in abundance in several locations within the country. Its abundance draws miners and commodity trading companies to Nigeria and has equally made the nation count among the list of wealthiest in the world

Also, venturing into dolomite mineral export is now a lucrative business one can start in Nigeria, as the demands from international buyers continue to be on the increase.

Bentonite Mineral Depositions In Nigeria And It Benefits