Rubber is one of the agricultural products (cash crop) that Nigeria, West Africa has been known for. The major rubber producing states in Nigeria comes from the southern part of the country, where high rainfall are being experienced, although it is also been grown in Abia, Anambra, Akwa Ibom, Rivers, Ebonyi and Bayelsa, it is commercially been grown in Ondo, Edo, Ogun, Delta (Sapele) and Cross River state.

Unlike synthetic rubber, the naturally occurring ones are called Natural Rubber with a botanical name of Hevea brasiliensis. 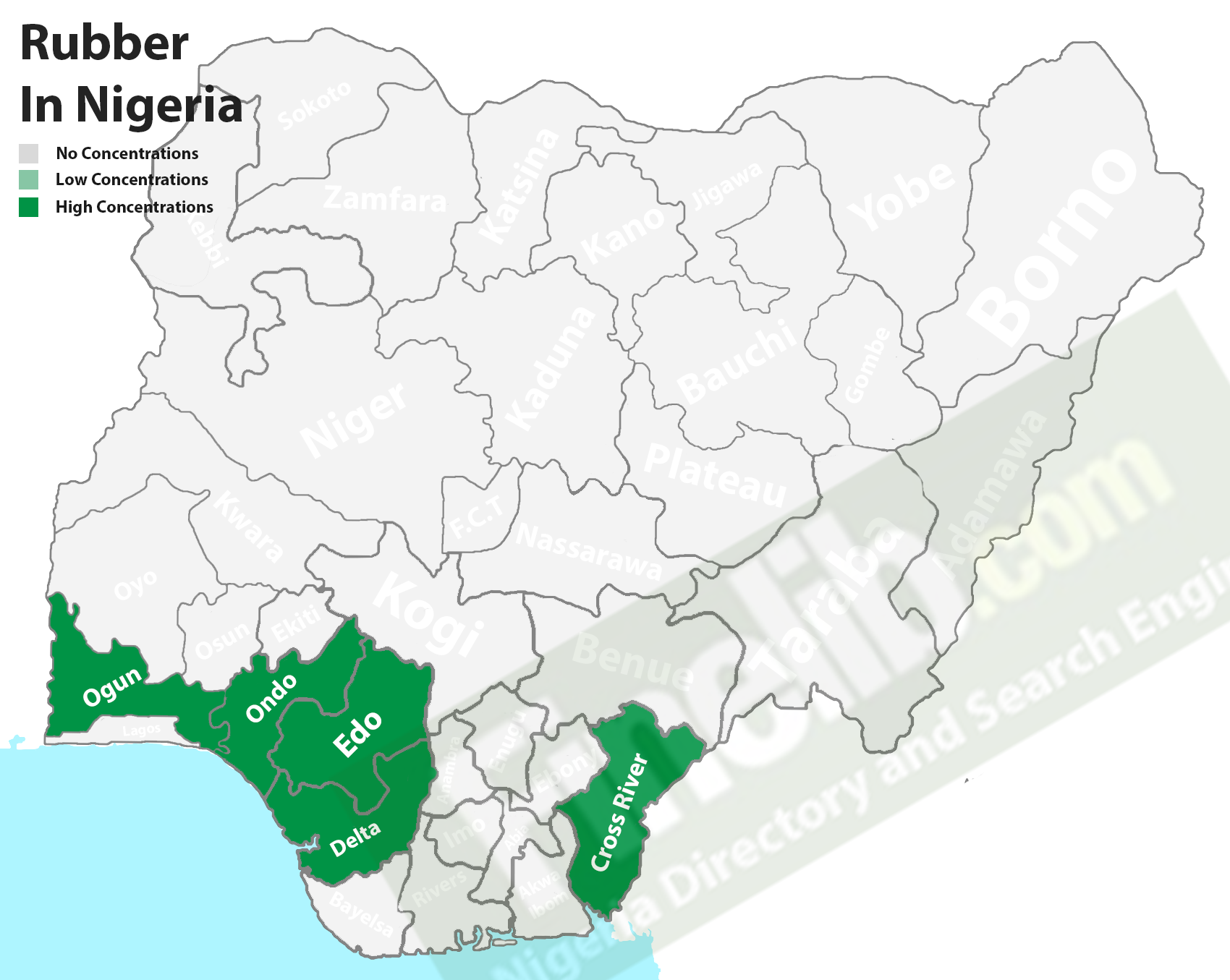 Due to the solidification of rubber when exposed to air, thin layers of the tree's bark is cut downwardly through the latex vessels where the rubber flows from to the tree trunk in a half spiral, the spiral allows a free flow of the latex to a collecting cup.

This is mostly carried out in the early hours of the morning or in the night before the rise in temperature as to allow the latex drip longer before coagulating.

The coagulated lumps in the collection cup are processed into dry forms for marketing. The rubber tree if handled carefully can produce rubber for more than 4 years continually and can only be used as a lumber when it stops producing latex.

in Africa, Nigeria was once among the major exporters of natural rubber with much comparative trade advantage on its production with began in the year 1894. It was not only a source for cash crop or for foreign exchange but also a raw material for most agro-based industries, it offers employment especially to those in the rural areas and has improved the economy.

Even though the cultivation of natural rubber has declined, there is still quite a good number of rubber producing and processing companies in Nigeria with vast natural rubber plantations such as Enghuat Industries Limited, Akamkpa Rubber Processing Company Limited and others.

The uses of natural rubber can be divided into 2, though not limited to only two, they are:

Uncured natural rubber: this is gummy, it easily deforms when warm and brittle when cold. The uses of this kind are few. It is used for footwear, cement, insulating blankets, adhesive, and friction tapes.

Vulcanized rubber: these are natural rubbers which are subjected to chemical processes to convert the natural rubber into more durable materials by the addition of sulphur.

Unlike uncured rubber, vulcanized materials are less sticky and possess superior mechanical properties. It has a high resistance characteristics to abrasion and is used for softer kinds of rubber valuable such as conveyor belts and treads of vehicle tyres. This kind of rubber can also be used in making of hard rubber valuable for piping housings and pump and in the handling of abrasive sludge.

Egusi seed is widely grown in West Africa with Nigeria accounting for about 65% of total production. The areas of high melon seed production in the country include Enugu, Benue, Nasarawa, Taraba and Kogi state. Melon seed (Colocynthis...