Gold is found in some African countries such as Nigeria in varying quantities, as a natural resource deposit mainly found in the Northern part of Nigeria. 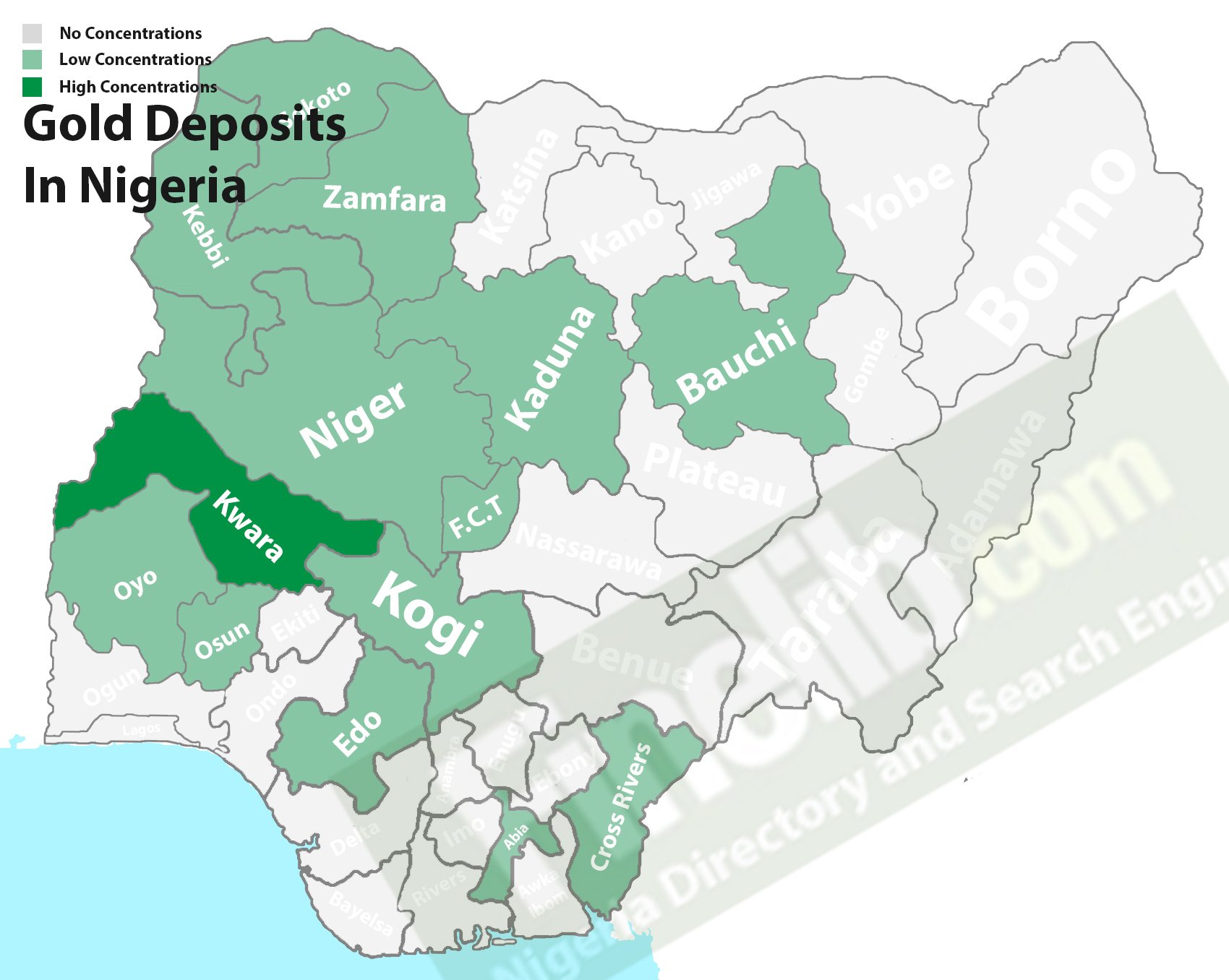 Features of Gold
Gold is a precious metal and the 3rd most valued after platinum and palladium.
Gold is bright in color and slightly reddish yellow with other physical characteristics such as its density and softness when in its purest form. It is also a malleable and ductile metal.

It is found throughout the earth's crust including the sea but has higher concentrations or natural spots in some areas.

It is naturally found in association with quartz veins which can be mostly found in granites and rocks.

Because Gold is mostly found in streams and has a reddish-yellow color, it was logically believed to be a blend of sunshine and water.

Physical Properties of Gold
The boiling and melting points of Gold are noted to be 2,970°C and 1,064°C respectively.

It has the atomic number 79. Chemically, gold is a transition metal and a group 11 element.

Gold mining in Nigeria
In Nigeria, all operations about gold from production to exploration, mining, and refining were mainly significant in the year 1913 with its highest production in the early 1930s.

But unfortunately, a few years after the promising mineral exploration and production, the production of gold in Nigeria declined due to the Second World War in 1939.

One of the renowned small-scale gold mining operations is carried out by the families of Aleye from Anka in Kwara State.

In the past, there was a corporation formed in the 1980s known as the Nigerian Mining Corporation (NMC). It was established with the sole aim of exploring and mining gold but was later liquidated.

Since Nigeria do not have a large scale mining sector, rather gold refinery is carried about by small scale or artisans in local areas, unlike countries in West Africa such as Ghana and Burkina Faso who has fully developed their mining potentials.

Illegal mining is abounding in Nigeria on a very large scale. An estimate of 2 Tons of Gold per month is being mined by artisans presently in Nigeria.

West Africa is an emerging gold producer in the world, out of 15 ECOWAS countries 12 of the countries are known to have considerable gold reserves. Notably, the bigger players are Ghana, Burkina Faso, Ivory Coast, and Senegal. Others are Niger, Sierra Leone, Liberia, and Guinea to mention but a few.

Ghana is the number 1 gold-producing country in Africa based on last year's statistics from the World Bank. West Africa as a whole is a huge gold-producing region.

Kian Smith gold trade & co is developing a gold refinery plant with a capacity of 3 tons of gold per month, with help of the local artisanal miners in Nigeria to supply gold raw materials to its refineries. There are gold mining reforms in Nigeria now, as part of the government strives to develop other areas of foreign earning.

Placer mining is predominately used when the gold medal is found associated with loose materials, ranging from clay to sand and gravel deposits.

Thus, making mining difficult, but because of their different densities, gold having a high density can be easily separated with water or dredging.

For vein mining, the veins are formed when mineral constituents within the rock mass are carried by an aqueous solution and deposited through the process of precipitation.

Many gold mines exploited especially during the gold rushes of the 19th century used this method. It is used when the gold ore is embedded in wall rocks or the areas surrounding it.

Carats (k) of Gold
A carat (k) of gold is the measurement of the combination of another metal and gold. This can also mean the amount of gold in various alloys.

Types of Gold
Gold usually has low reactivity with other metals and is quite malleable.
Thus said, because of gold’s malleability, it is more effective when it is joined with other metal alloys.

This will improve the strength of the metal when producing pieces of jewelry or other things.

Therefore, because of the combination of other metals with pure gold, the end product will turn out to have many colors or types.

1.    Yellow gold
Yellow gold is a naturally occurring type of gold and as such, it is in the pure form.
When producing jewelry, yellow gold is combined with other metals to make an alloy.
The metals to use can be silver, copper, etc. of different percentages but gold usually takes 75%. The other metals share the rest of the percentages.

2.    White gold
White gold usually has a color close to platinum or silver. Therefore, pure gold is mixed with nickel or even palladium to get that color.

3.    Rose gold
Rose gold can also be called red gold or pink gold. This type of gold is alloyed with copper to give it its rose color.

Rose gold comes in different shades depending on the amount of copper in it.
The rose gold will have a redder color if it has more copper content. It is common to have a combination of 25% copper and 75% gold to make rose gold.
This type of gold is more resilient and affordable because copper is not very expensive.

4.    Green gold
Green gold can also be called electrum. This type of gold is a combination of gold and silver.
The quantity of silver will give you the desired color that you want.
Generally, green gold is a blend of 27% silver and 73% gold. You have to bear in mind that the blend can either give a lighter or darker color.

5.    Blue gold
A blue-gold is an alloy or type of gold with a blend of indium or gallium.
Indium usually gives a darker (rich) blue color while gallium gives a lighter blue color. It all depends on the choice. You can have an alloy of 54% indium and 46% gold to produce blue gold.

What type of Gold is the best?
Generally, gold comes in different carats and as said earlier, gold is more resilient when they are alloyed with other metals.

From the above analysis, 24k gold is the best but you hardly see such.

Yellow gold however is the best type of gold to go for. But, it is important to consider the usage of gold before you purchase. Also, consider your color preference when going for your gold.

The discovery of Gold
It was said that Gold was first discovered by a child who went to a creek and found a shiny rock.

This happened thousands of years ago and afterward, many persons have been discovering Gold in its natural form. These discoveries were in streams worldwide.
Over the years, Gold has become a part of human life as it is used in virtually every form of human endeavor.

History of Gold
Gold is the first popularly known metal worldwide. It was known first before any other metal.

They were first used in producing ornaments because they are easy to work on. They melt easily unlike any other metal.
Gold has a relationship with immortality in addition to prosperity and the deities.

During the time of early development, gold was dedicated to leaders and gods of the land. The people name Gold after them.

People of the ancient period used Gold to make idols and shrines for their different gods.

This idea made Gold to be highly valued as it is used to adorn their most respected figures.

Also, because of the high value of Gold, it was only the wealthy that possessed it those days.

Majorly, gold became money because it was easy to melt, form and measure.

During 550B.C. ancient Greece mined gold and this made philosophers like Aristotle and Plato write more about the theories of the origin of Gold.

The world economy needs a monetary standard to be able to prosper and therefore, the introduction of Gold as a means of exchange was welcomed.

Gold replaced the barter system to make the exchange of goods and services easier.

Primitive Gold mining history
During 3600 B.C. the Egyptiangoldsmiths began mining gold by using prisoners in their custody as laborers.

When the Egyptians began mining, there was no value placed on the metal. It was basically used for making ornaments for their gods and leaders.

The Greeks were the first to mine gold in the middle and Mediterranean east regions. They devised a primitive means by which Gold can be mined in 550 B.C.

The Romans in their own empire used more advanced methods of mining gold in 100B.C. They made advancements from the Greek method of mining.

They were more productive because they used slaves in their mining operations.
They made so many discoveries which include the use of water wheels, mining hydraulically by diverting streams of water.

The Romans's gold became more valuable because it is usually very pure considering their technology.

What led to the transition from primitive gold mining to modern gold mining?
Firstly, there was an establishment of Hallmarking practice at the goldsmith’s Hall in London, 1300.

This was made to be able to determine the quality of all forms of precious metals.
Secondly, in 1422, at a period called the Venice records year, Venice recorded a mint of gold ducats worth 1.2 million.

These are coins that do not just carry high value and can be easily minted.
Thirdly, in 1717, the British government included a 77 shilling value to the mint price of gold.

The value attached thus is what is known today as the UK’s gold standard.

This includes gold, as gold was valued at that time at $19.30 per ounce.

The Gold Rush of California
John Marshall constructs lumber mills and as he was constructing for John Sutter on January 1848, at a place close to Sacramento, he saw bits of gold.

The owner of the mill wanted to initially keep the matter concealed, but in no time people talked about it.

In no time, it led to the people from other places coming to California for gold mining.

The massive immigration of people from other places led to the place being nicknamed ‘forty-niners’.

Placer mining is predominately used when the gold medal is found associated with loose materials, ranging from clay to sand and gravel deposits.

Thus, making mining difficult, but because of their different densities, gold having a high density can be easily separated with water or dredging.

For vein mining, the veins are formed when mineral constituents within the rock mass are carried by an aqueous solution and deposited through the process of precipitation.

Many gold mines exploited especially during the gold rushes of the 19th century used this method. It is used when the gold ore is embedded in wall rocks or the areas surrounding it.

What are the uses of Gold?
Gold has a variety of uses
•    It is used for jewelry and decoration.
•    It conducts electricity and does not tarnish.
•    Used as a food additive in food and drinks.
•    In medicine, it is used for Cancer treatment and health issues.
•    It guarantees the value of currencies and lots more.

In terms of investment, gold is known to be the most valuable metal. It is also seen as a mark of wealth.

Kyanite Natural Mineral Resources In Nigeria And Its Deposits

Kyanite is one of the natural mineral resources in Nigeria, West Africa, it is a blue-green crystalline mineral that contains aluminium silicate and is mostly found in metamorphic rocks, sedimentary rock, or aluminum-rich metamorphic pegmatites. Kyanite can...

Quartzite solid mineral deposits in Nigeria, West Africa can be found in Ekiti, Taraba, Kogi, Kwara, and Oyo states. Quartzite is a metamorphic rock that is hard with a non-layered appearance; its color is of different shades...